01 October 2020: Euston Quah is Albert Winsemius Chair Professor and head of economics at Nanyang Technological University. He is also the president of the Economic Society of Singapore.

A guide to valuing time spent and saved during the pandemic

The Covid-19 pandemic has raised interesting questions on the value of time. Time spent at home versus time spent in the office; time spent travelling to work; leisure and recreation time; time spent in treatment and hospitalisation; time spent on volunteer work; and time in lockdown.

Economists are often called upon to value time for such purposes as in estimating the costs of traffic congestion, time savings in transportation projects, productivity gains from time savings, and as part of valuing the benefits of averting diseases or illnesses; and, last but not least, in measuring non-market productive activities such as volunteer work and household production, which should, but do not, count towards gross domestic product (GDP).

Time has economic value just like any market commodity, and measuring and valuing time for all its different users is not just a curiosity but actually a necessity.

WORKING TIME
During this pandemic, many workers spend more time working from home than in the office. This working arrangement, which is likely to be the new normal after the pandemic is over, calls into question whether productivity can be maintained or even raised from working at home vis-a-vis office
time. So what is the value of working time?

Estimation of the value of working time is relatively easy. Conventionally, this will be indicated by the wage rates earned. Employers hire labour as
long as the value added to the additional output by the last worker hired is higher than the wage rate paid to this worker (or when marginal labour cost is lower than marginal output). This hiring will stop when the last worker hired adds value just equal to the wage rate paid. Employers would
not want to incur higher costs with more workers if the market value
they bring in to the firm is less than the wage costs.

Thus, whether the employee works at home or in the office does not matter. The same value is ascribed to the opportunity cost of time which is the wage rate. Limitations of this approach, however, include rigidities in the lump-sum amount of working time – eight-hour day or 40-hour week – making it difficult to know how much an hour of time is worth since workers cannot often choose the number of hours they wish to work.

The value of time to the individual and the value of time to the employer would also likely be different. This is because to the employer, labour is only one component cost to total cost (capital costs, non-wage costs and so on) whereas the individual will also consider household production and leisure values. It is also the case that for the employer, labour needs to
complement such things as capital, disciplines of a workplace, and
some intangibles including social interaction.

In the same way as we estimate the value of working time, the value of non-working time must be equal to what a person forgoes by way of earnings from putting that time to market work.

If this forgone wage or income rises, or if disutility of non-work time increases, then the amount of time spent at home will be reduced. Conversely, non-working time will increase if wage rates fall from working time or if work at the office becomes more unpleasurable.

Time is thus measurable, can be valued and exchanged. And if one does not have enough time to do everything one wants, then one can also buy someone else’s time. For example, we hire babysitters and domestic workers to do child-minding and housekeeping, and free up our time for engagements in other activities. The value of time is derived from how much we value what that time could be used for.

However, this trade-off approach of measuring time has drawbacks because it fails to take account of the fact that time values are often
situation-specific.

TRAVELLING TIME
Take the case of transportation studies involving travel-time savings. Research into the economic value of time in transport studies has focused on two main areas: reducing congestion and improvements in transport links and networks.

Another way is to observe how people make choices in transport options in their comparison between cost and speed or savings in travelling time. Those who choose a higher speed mode of transport save time but have to incur a higher cost. The additional cost provides an indication of the value of travelling time. This method, known as the trade-off approach, can be applied in public versus private transport choices.

Yet another approach to valuing travel time is to ask commuters about their willingness to pay for certain options. This non-market-contingent valuation method elicits this value of savings in time by estimating how much consumers would be prepared to pay for freeing up some travelling
time.

Last but not least is to value such savings in time by reference to real
estate values. One reason why some properties command a higher
price is their proximity to downtown or to some other well-known place. This differential property price can be deduced from regression studies and used as the value of commuting time.

Thus the value of recreational time must be equal to what people can do with their time not spent in recreation; and this value can be the forgone opportunities for market work and/or time devoted to housework.

And, because this recreational time takes place outside market work time, then the opportunity cost must be based on time valued for leisure and not that of work time. Studies have shown that people tend to value work time and leisure time differently, and they discount their value of time in leisure by as much as 40 per cent from their wage rates.

The same is expected from the value of housework time where traditionally forgone market wages would be used as a proxy measure. In the circuit breaker period, this value would be less than the full wage rates. As the time devoted to household production increases involuntarily because of reduced options in alternative uses of time including market-work time, this value of time per hour would surely be valued less compared with pre-circuit breaker days.

TIME AS A COST
In many public sector projects or policies, time is often not given its proper value, whether as time savings as benefits; or time costs where incurred.

In valuing time as a commodity, perhaps the most important aspect is not to value it with a single-purpose use in mind but rather to recognise that time should be valued by its different uses, such as whether it is work or non-working time, travelling time, leisure and recreational time, and time for household production.

VOLUNTEER WORK
One major use of time during this pandemic is that many people offered to work as volunteers in public health support and in the myriad of activities for assistance to the elderly. Volunteer work, though not remunerated, has
economic value as people readily give up other uses of their time to do such volunteer work, and this amount can and should be estimated in any exercise to elicit the cost of the pandemic.

Thus, whether we resort to using forgone wages as a measure of opportunity cost, or behavioural estimates as to how people make choices between saving time and incurring higher monetary costs, one must take into consideration and adjust such time valuations given constraints and restrictions in the use of time during this pandemic period.

There will be many studies attempting to derive the total cost of the pandemic. Such costs will include costs of medical treatment, hospitalisation and healthcare. Also included will be losses in productivity and forgone savings, as well as losses in GDP, business and tourism, and losses from cancelled school classes and events, and lost intangibles such as reduced social activities and interaction, increased mental stresses and dysfunctional families.

But an important loss that should be recognised and accounted for is time costs. The short take from all this is that time is a good that has value in its use, and it is necessary to put a value on time costs or time savings when we estimate the total cost of the pandemic as well as for measuring the trade off economic costs between lockdowns (saving livelihoods) and public health safety (saving lives). Valuing time is therefore crucial in any such studies beyond conventional measurement of time in transport studies. ( 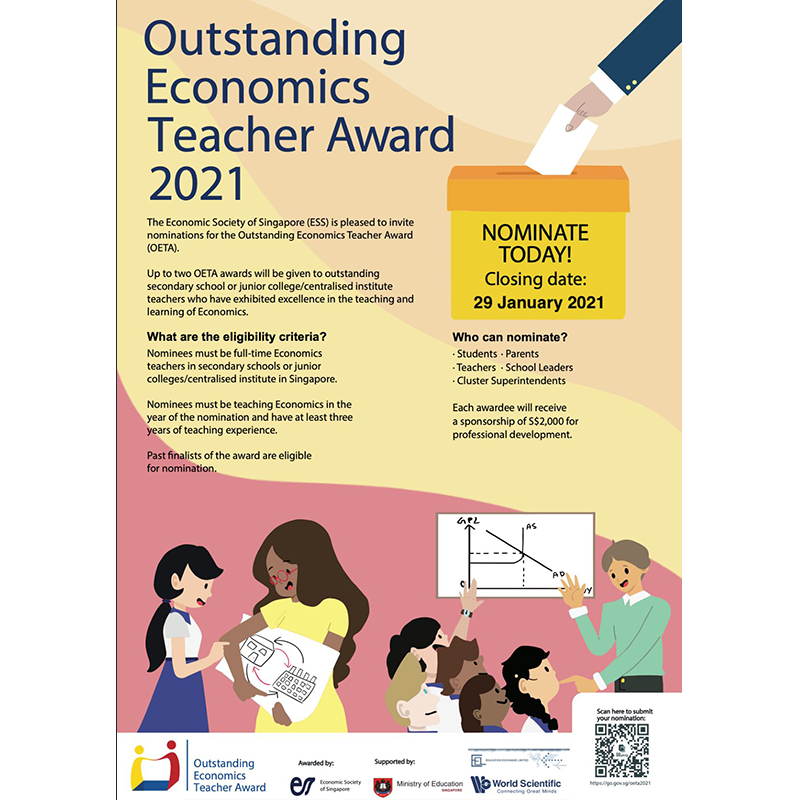 ESS is pleased to invite nominations for the Outstanding Economics Teacher Award (OETA). This award was first launched in 2016. Up to two OETA awards will be given to outstanding secondary or junior college/centralised institute teachers who have exhibited excellence in the teaching and learning of Economics. Could it be time to swop fast car for slower, sturdier one?